Do you have brown patches in your otherwise solid green lawn? Often, grubs are responsible. Grubs are not a species; they are beetle larvae. These small beings need a lot of energy to grow into beetles, and they get the nutrients they need from plant life. Homeowners commonly have grub infestations of their lawns, causing brown patches. Grubs can also consume a garden. If you have a grub infestation, you’re probably wondering: Exactly what are grubs? How do I identify and eliminate them? 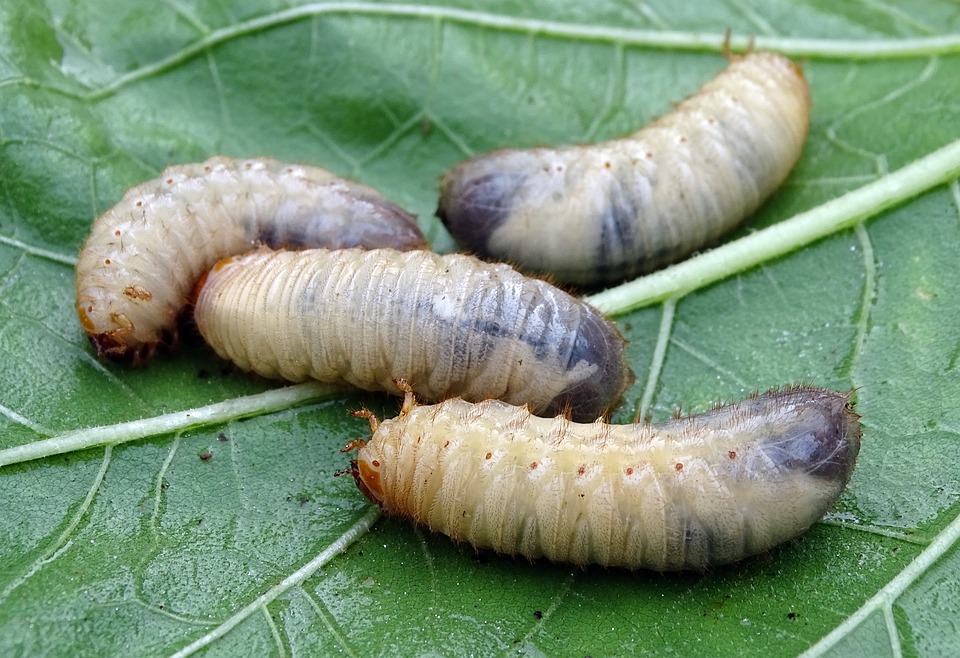 In essence, grubs are baby beetles. Japanese beetles, June Beetles and European chafer beetles all commonly start life as grubs. They live in grass, often in yards and gardens. They can be identified by sight. They are small, white and worm-like. Grubs need food to grow into beetles, and their chosen fare is grass roots. Unfortunately, this means they kill large swaths of grass, leaving brown patches in an otherwise majestic lawn. They can be eliminated by introducing natural grub hunters or through the application of insecticides.

While every lawn has some grubs and small numbers won’t hurt the grass, a growing population can burgeon into a grub infestation, at which point some major lawn repair will be in order. It’s best to treat the lawn for grubs as soon as they start to cause damage. The first step is determining if a grub infestation is responsible for your lawn woes.

Treating Your Lawn for Grubs 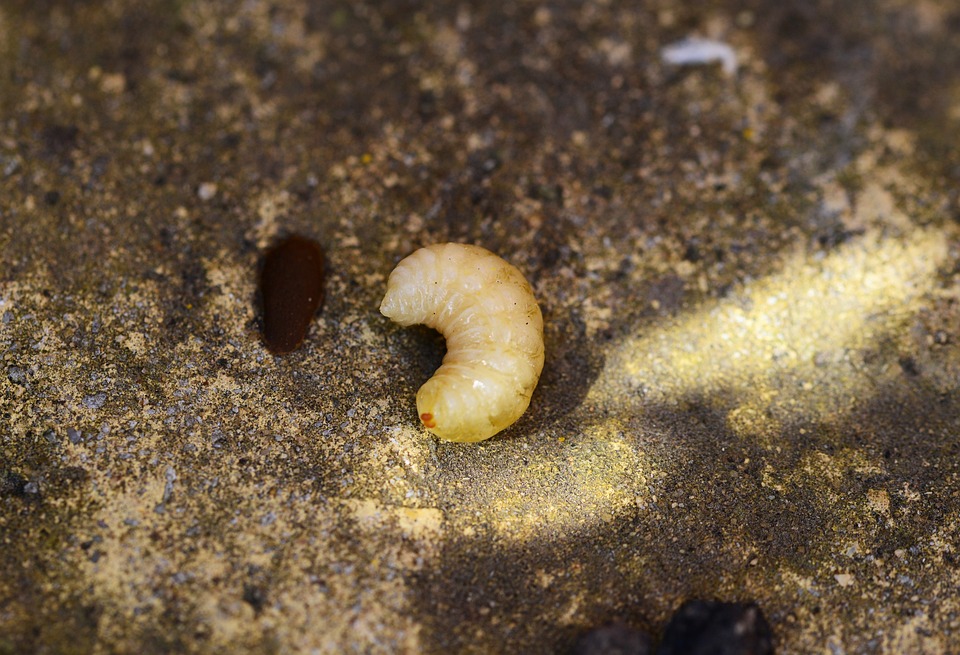 Before running out to the hardware store looking for grub killing chemicals, determine if grubs are really the problem.

If mysterious brown patches have you suspicious of a grub infestation, you’ll need to dig up some ground and see if they are burrowed in and munching on your grass roots. First, remove a square foot of sod approximately three inches deep from the center of the brown patch. Sift through and search for grubs. Depending on the species of beetle, they will be 1/2 to 1 inch long.

Grubs are milky white and C-shaped. If you find over five, you’ve got a grub infestation. It’s time to decide on the best method of eliminating the grubs before they chomp on the rest of your lawn.

Natural grub treatment involves introducing naturally occurring elements into your lawn’s ecosystem that control the grub population. In a way, this is similar to reintroducing a predator to an area where one species has multiplied beyond the ability of the ecosystem to support them.

Many people prefer natural methods because they do not harm beneficial insects that co-exist with the grubs. With insecticides, you lose the good insects along with the bad. In addition, exposure to chemicals may be harmful to health, so, when using them, follow the directions carefully to protect yourself.

What Are Grubs Natural Enemies? 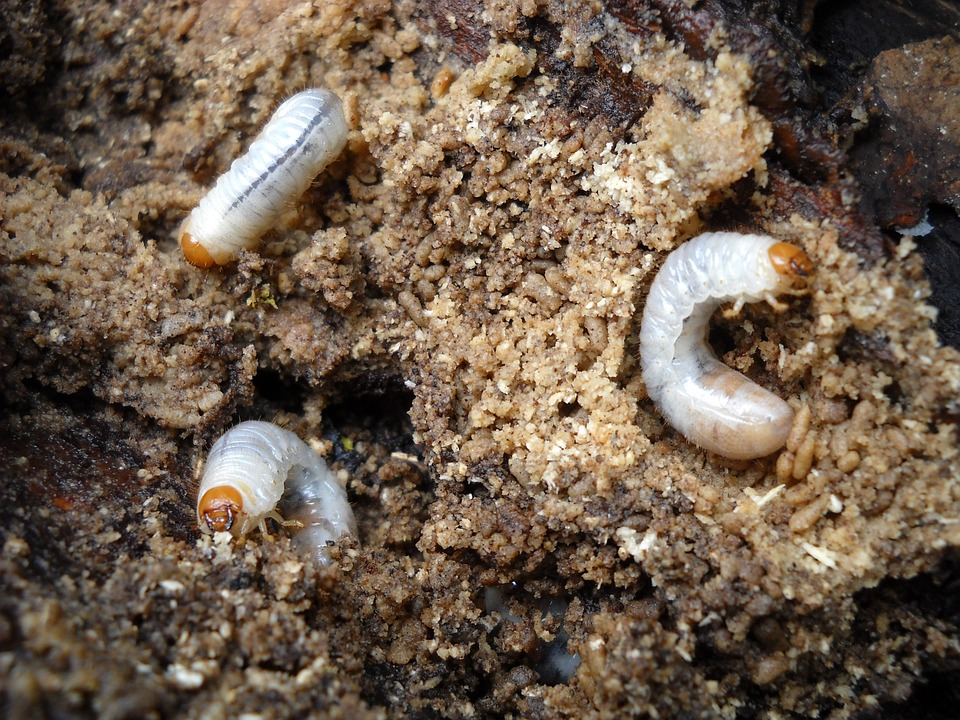 What are grubs worst enemy? Beneficial nematodes slowly reduce the grub population over about three years. Nematodes are a microscopic parasite that invades the bodies of grubs. They release a bacteria that multiplies and kills the host grub. It takes several years for nematodes to establish a colony large enough to kill enough grubs to return the lawn to normal. Despite this lengthy time, you keep your lawn chemical free and the helpful insects remain in place, helping you achieve the lawn and garden of your dreams.

It’s important to purchase the nematodes from a reputable source. They must be transported carefully and often need refrigeration. They come on a sponge that is wetted and put inside a sprayer, from which they are sprinkled onto the lawn with a garden hose. If you have a dog or two, consider getting the nematode variety that also attacks flea larvae. It’s possible to control grubs and fleas in one fell swoop.

What are grubs worst long-term enemy? Milky spores are sold in powder form. Technically, milky spores are known as the Bacillus popilliae spore. It got its nickname because it creates a bacterium in the soil called milky disease. It does no harm to the lawn, but it’s fatal to grubs. It takes several years for the beneficial spores to grow numerous enough to eliminate the grubs, but once it takes hold, milky disease continues to stave off grubs for 15 to 20 years.

Adult beetles lay eggs during the hot summer months. The larvae are in danger if it’s a dry summer, because they need substantial moisture to survive and grow into beetles. Should you get a dry summer, avoid watering the lawn for three or four weeks to aid the soil drying process further. The eggs will die, reducing the number of larvae in next year’s batch. The lawn also dries out, but it will return to its former green glory once you start watering again, and the grub population will be much smaller.

There’s no doubt about it, chemical treatment kill grubs fast, but it also kills other insects that are helping your lawn and garden shine brightly. Because the chemicals are toxic, follow the instructions for safe use very carefully. In addition, keep children and pets away from the lawn while it’s being treated as chemical grass treatments can pose a health risk.

If your lawn suffers from a current infestation, you’ll need a curative treatment. Curatives are designed to eliminate immature larvae. They should be applied in the late summer or early fall when the larvae intensely feed on the grass roots. Don’t miss the important seasonal application window because once the larvae develop into pupae, curative chemicals have no effect on them. Products that contain trichlorfon are highly effective.

Preventative chemicals should be employed if the lawn has had previous grub problems or if brown patches are visible in adjoining yards. When the neighbors yards become infected, we can assume that beetles are active in the area and will make their way to your lawn, where they will lay eggs. Preventative treatments can stop the next generation of grubs but won’t help a current infestation. Consider products that contain imidacloprid or halofenozide.

Not all grub troubles requires chemicals, nematodes or milky spores. Often, after testing the soil, you’ll find you have fewer than five grubs in the sample. That doesn’t mean you should just ignore them. After all, as more beetles hatch, the number of eggs will increase, leading to an eventual infestation. Here are some DIY techniques that will keep the grub population from exploding.

Tilling the Soil (for Gardens)

Grubs in the vegetable garden can really spoil the growing season. If they feast on your plants’ roots, chances are you won’t be feasting on those tasty tomatoes. To practice a little grub control, remove all plant litter and organic matter during the early fall. Before the first cold snap, till the soil about seven inches deep. Two weeks later, till it again about two inches deep. Two weeks prior to spring planting, till again about two inches deep. In addition to grubs, this frequent tilling kills adult beetles before they can lay eggs.

Dish soaps smothers grubs, so they make an effective grub spray. To create one, mix one tablespoon of liquid dish soap in one quart of water. Use the spray immediately after mixing and apply it directly to the grubs.

What are grubs? Well, they’re nothing like us in that they hate garlic. They will run the other way if you deploy it in crushed cloves around your garden and yard. This is an excellent preventative measure to drive the beetles away before they can deposit their larvae. Chopped garlic and mineral oil can also be mixed to create a spray that kills grubs.

This spray drives off adult beetles, so grubs never get a chance to take hold of your yard or garden. To create this spray, mix the following:

Place the spray in a spray bottle and apply to your lawn or garden. This mixture creates a repellent that send beetles scurrying for a new place to lay their eggs.

A beautiful lawn and garden makes your home more enjoyable and increases its curb appeal. An infestation of grubs can turn the lawn into a brown field of dead grass and leave a once vibrant garden sagging. Grubs depend on the nutrients in grass roots to gain the strength and size they need to survive and become adult beetles. Adult female beetles deposit eggs in grass during the mid and late summer. As a result, their voracious offspring do the most damage in late summer and early fall. It’s important to check for grub infestation before then.

Grubs burrow deep during winter and lay dormant. During the spring, they resurface, feed again and become beetles. It’s important to treat for grubs in the spring and take steps to discourage beetles from laying eggs later in the year. Now that you can answer the question what are grubs, you are ready to protect your lawn from these insidious grass and plant eaters.